There were nine pitches Wednesday night, and all of them were excellent ideas. Their original submissions were posted earlier. Below is our brief summary of the shenanigans, including links to sites and as much event information as we could dig up. If you are one of the pitchers (pitchees?) and have more information to share with us that you’d like on this site, please email it to team@kwawesome.org. If you are a member of the larger #kwawesome community, please, attend their events, donate time or money, connect with the presenters, just help them out any way you can. Each one has a great idea that would help to make KW an even more awesome place to live. 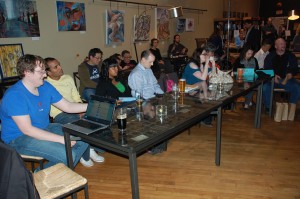 Above: the trustees get ready to hear the pitches. 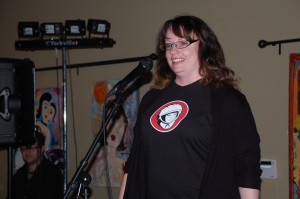 Charlotte Armstrong presented. KW is the second Canadian chapter for Nerd Night, a worldwide organization that helps nerds get together and have nerdy talks and share nerdy ideas and do awesome nerdy stuff. Basically, Nerd Night centers around making presentations and the KW Nerd Night Organization would put the money towards buying a projector for the presentations since borrowing one for each Nerd Night can be very difficult.

Nerd Night KW has a Facebook page. Join it. Their next meet up is May 29 4:30pm at Rum Runner Pub. You better be there.

Pitch #2: Many Faces of Cambridge 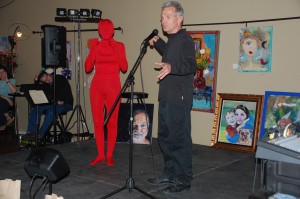 Robert Fox presented. His brave wife is the one in the red bodysuit. Robert, in conjunction with other artists, is basically talking to locals in Cambridge and painting their portraits. The portraits are to then be put on display in local businesses as well as at a show at Cambridge City Hall.  The goal is to get 100 portraits done, telling the stories of the ordinary citizens of Cambridge you see every day. The show at City Hall in Cambridge will have people in bodysuits holding the portraits and sharing the details of the lives of the person whose portrait they’re carrying. Money will go towards the show and the portraits.

Robert has a site. The City Hall show is Friday, June 15 from 6 to 11pm at Cambridge City Hall. See you there! 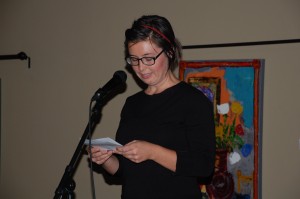 Katie Klein presented. Her organization is working to put together a calendar/planner for Christian activists who are devoted to the teachings of Jesus and ideas such as: justice, kindness, cooperation, education, equality, and the like. They are fans of Christian Anarchism. The prize money would go directly towards the cost of printing the planners. 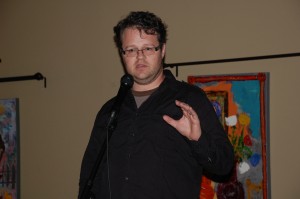 Sam Varteniuk presented. Sam has put together a short film competition in KW called Berlin Shorts (shouldn’t that be called Lederhosen?). Various short films produced in the KW area are screened, with feedback provided from other directors, and a vote for winners. Winners receive a prize and are encouraged to re-submit again. The event costs about $500 to run, and money would go towards running more events and prizes. The next screening it May 26, 2012 at Queen Street Commons Cafe.

Visit their site. Go to the next screening. Do it. 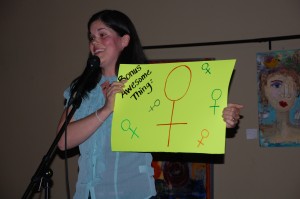 Amy Neufeld presented. It must be noted that she is the spouse of Sam Varteniuk, who presented for Berlin Shorts, our first KW Awesome Foundation competition between spouses! Will one end up on the couch tonight? The Fairy Catcher’s Companion is about entertainment for kids that doesn’t make parent’s want to gouge their eyes out (I’m looking at you, Backyardigans). It is a play with an all-female cast that addresses important issues and questions for kids while treating them like grown-ups. The prize money would go towards actually paying the artists to put on the performance.

The show being run is July 6 and 7 at the Registry Theatre. 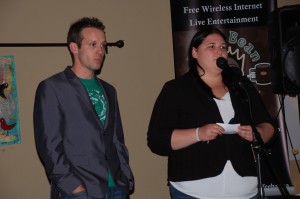 Jennifer Cushing presented. Jennifer and another Conestoga student have started Bars & Tunes, a weekly video to promote local musicians. They interview them, show some clips of recent on-stage performances, and post it all on the internet. But, alas, getting a hold of a camera to film it is every week can prove to be quite difficult. The prize money would go towards purchasing a camera to film the interviews every week.

You can watch episodes of Bars & Tunes on their Youtube channel. Go give ’em some traffic. 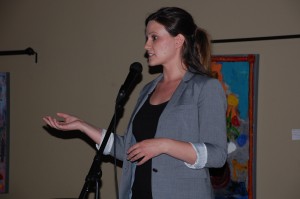 Julia Coburn presented. WorldVUZE is a service being developed for kids in classrooms K-12 to connect with kids in other classrooms all around the world. The idea is for students to share their perspectives of topics being learned in their class with kids in other classrooms, in order to gain a global perspective about topics being learned in class. Prize money would go towards creating a website to help further their goals. 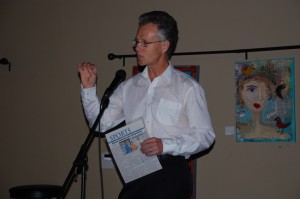 Patrick Campbell presented. The bathrooms at the Camp Heidelberg campground have broken down, and it may cost up to $20,000 to fix them. 16,000 kids go through the camp a year, and if the bathrooms can’t be fixed and brought back up to standards, the local school boards won’t send any kids there. The prize would go towards the future cost of the fix to the plumbing. 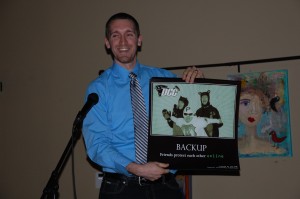 Chris Bignell presented. Chris is a teacher in KW who has started a project to combat online bullying. His idea is to have students design anti-cyberbullying posters for other students. Prize money would go towards incentives for students to create the posters as well as printing costs for the posters.

Decision-making time is always the hardest part, at some point just about every pitch was considered for the $1,000 grant. There are just so many great ideas to make the Kitchener-Waterloo area an even better place to live, but only one prize to give. Fortunately it is perfectly fine to re-apply. 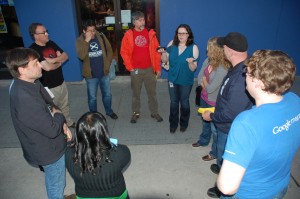 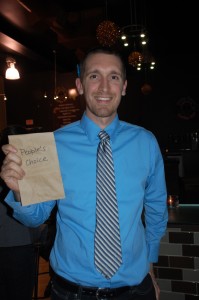 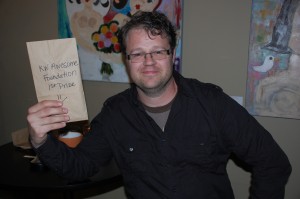 Thanks to all nine of our pitch presenters for coming out and sharing their vision of how to make KW an even more awesome place to live. About two months until our next pitch night, so please, submit your ideas now.